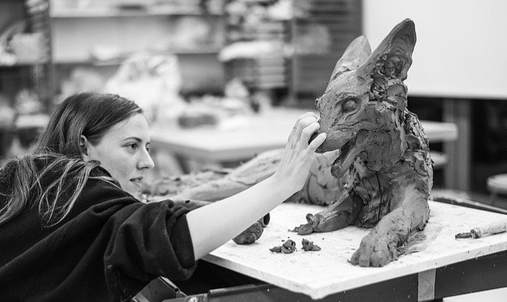 Kelly E. Potter is an artist living and working in the Berkshires, MA. She recently received her Undergraduate BFA degree in Studio Arts at the University of Massachusetts Amherst with a focus in painting. Potter has worked and exhibited throughout several locations of New England including the Berkshires and Pioneer Valley of Massachusetts, Old Lyme Connecticut, and Brooklyn New York. She has worked as a Studio Assistant for multiple artists specializing in both oil painting and ceramics. While Potter’s primary focus is painting, she also creates sculptural and functional works in clay and works as a freelance fantasy concept artist.

Kelly E. Potter's paintings and sculptures surround her experiences exploring the forests and encountering animals in the wild. Through her work, Potter wishes to address the complicated power relationships that exist between humans and nature, particularly those surrounding plant and animal species that have a strong capacity to adapt and thrive in our increasingly industrialized environment.
​
My fascination with coyotes began as a child when I heard their eerie cries from the darkness outside my bedroom window. I found excitement looking for traces of these mysterious animals in the forests of my backyard. Now, I spend my free time looking for coyote and deer trails throughout Western Massachusetts, which usually follow mountain ridges and industrial power lines where the trees are cut and wild black raspberries grow. Remnants of bones, feathers, and tracks give clues to animal presence. Following these trails, I begin to learn about the way these animals live and how surprisingly close they are to suburban homes. By exploring patches of undeveloped land throughout New England, I hope to better understand how these animals adapt to the ever growing urban development and congestion of human activity on the natural world. I aim to translate these observations and experiences into painting and ceramic sculpture in a way that accurately represents animals of this particular anthrome, and the ways in which they live among us.